As required by HB21-1109, the Broadband Deployment Board (BDB) is developing a request for proposal (RFP) process “under which, for each calendar year, the board reserves up to sixty percent of the HCSM money allocated for broadband deployment to award grants to proposed projects that serve critically unserved areas identified by the office, including any critically unserved areas within the boundaries of an indian reservation located within the state.”

On March 22, the BDB reserved 50% of the High-Cost Support Mechanism (HCSM) to fund projects in areas considered “critically unserved,” which is defined as a reported service of 13 Mbps download and 2 Mbps upload or less.

On March 29, the BDB identified geographic areas to be included in the RFP process and decided to invite members of the public to provide comment on whether or not the Board’s specified areas are in fact in need of service, as well as propose additional geographic areas. The two-week public comment period opened today (April 4) and closes April 18.

The BDB identified the following geographic areas for review and public comment:

Note: The critically unserved locations can be reviewed by clicking on the PDF maps linked in the above list, or by visiting the Broadband Board Toolkit Map and turning on the “Critically Unserved” layer in the Layer List, as seen here: 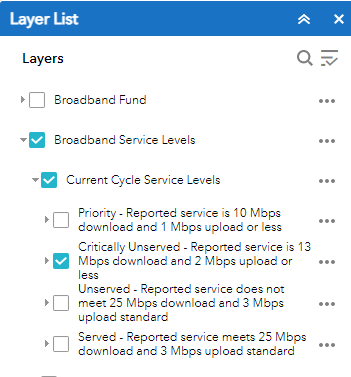 The Winter 2023 Grant Cycle Applications were due on January 15. The comment period was scheduled to begin on January 16, however we experienced technical issues that prevented us from publishing all…